How to edit distribution methods for a group

Edit the client assignment method for each group

The available distribution rules we have are:

All available agents will receive a notification at the same time whenever a new client comes in. The client will be in the portfolio of the first agent who takes them from the Unassigned inbox.

What are the advantages of the Manual method?

The major advantage of this method is the response speed, since as soon as a new lead comes in, all the agents in the group can pick it up instantly, which leads to very quick responses for new clients.

What are the disadvantages of the Manual method?

The major disadvantage is that it isn't an equitable method, since the leads are available to be taken by all agents as soon as the client comes in. That means that a few agents can get many more clients than their colleagues. This can happen because they have a better internet connection, they're faster, more attentive, take as many leads as they can all at once, etc.

The information is distributed equitably among the agents, but they don't lose exclusivity. On this setting, new clients are distributed as they come in and are assigned to the agent who has gone the longest without receiving a new client. Remember that the client will stay available to that agent no matter how long they take to respond.

What are the advantages of the Round Robin method?

What are the advantages of the Round Robin method?

The main disadvantage of the Round Robin method is that, because the leads are distributed 100% equally, response times can be affected. If, say, an agent goes home early because they are sick, if they don't adjust their availability for that day (or the administrator doesn't set them to Not available to take leads), clients will still be assigned to them until their scheduled time is up. The leads assigned to them will stay in their inbox indefinitely, until the agent comes back to work the next day, and will not be distributed to anyone else.

The Radar method is between Round Robin and Manual. New clients are distributed equally among the available agents for a predetermined time as they come in.

In this configuration, the agent has exclusive access to the prospect during a set period of time. If they don't respond in time, they lose that exclusivity and the next agent will be notified. If that agent doesn't respond in time either, a third agent would be notified, and so on until all the agents have been notified and someone has claimed the new client.

For example, if you have a Radar setting at 5 minutes then 1 minute (that means that the first agent who receives the lead has 5 minutes of exclusivity to take it, then the client will go to the following agents successively every one minute), 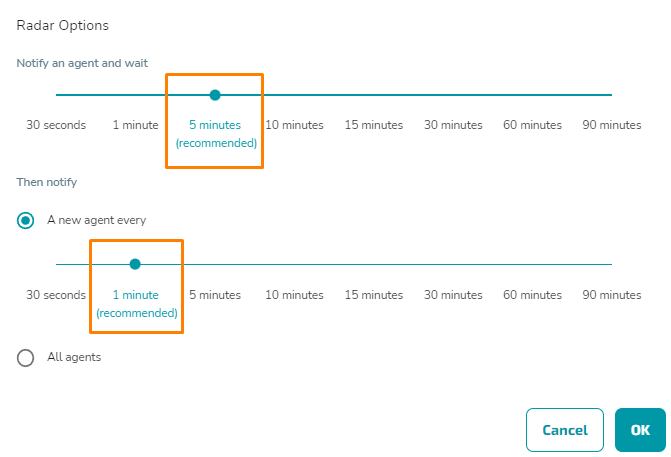 and there are three agents available (A, B, and C) in the group, when the first client comes in, they will go to A and that agent will have 5 minutes to claim them. If after 5 minutes the client wasn't claimed, agent B will also be able to see the contact, so A and B will both be able to pick up and respond to that client. If another minute passes and no one has taken the client, A, B, and C will be able to take the client and they will stay with the first agent to claim them.

Note that if the first client is transferred to agent A, the second client will go to agent B exclusively for 5 minutes, and the next to agent C.

What are the advantages of the Radar method?

The advantage of the radar method is that it is midway between Manual and Round Robin. With this rule, you can watch out for your response times, while still giving a few minute's opportunity for your agents to take the client and maintain equitable distribution.

What are the disadvantages of the Radar method?

The disadvantage of the method is that it isn't a 100%equitable method like Round Robin, since after the first exclusivity period passes multiple agents can pick up the lead. The lead distribution is sequential, but if an agent delays taking a lead and the client is taken by another agent, the system will not attempt to compensate for that loss and will continue with the distribution as planned. So, going back to the example of agents A, B, and C, the equitable distribution will be in the first 5 minutes, when the lead will go to A, another for B, and the next for C.

What happens if B takes too long and doesn't take the lead in time?

The lead will be taken by A or C and the distribution will continue as planned, so A and C will likely end up with more leads than agent B.

To configure the distribution rules, follow the steps below:

Remember that these are group configurations, so if an integration has its own distribution rules, they will not be affected by this group rule.

To configure the methods:

1 - Go to Settings > Users&Groups and click on the three dots at the top right of the group you want to modify the rule for:

2 - Go to Contact assignment and select any of the following methods: 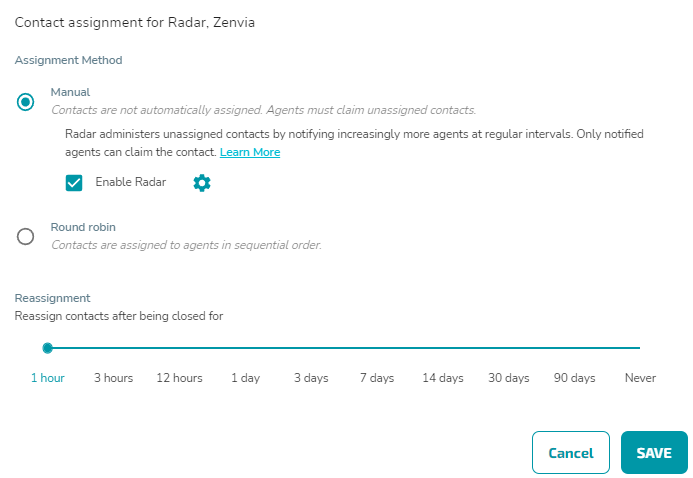